The most powerful tools of any criminal organization is secrecy & systems management. Canadian family law cartel deploys a system of secrecy at every possible level which is in contrast to every other public business in the democratic world. From the top (rich elite white high ranking bureaucrats, politicians, church & supreme court judges with their law societies) to family law lawyers at the ground level making $300 an hour off of children & families. Also of interest is the news media sandwiched in between. News media in Canada is near exclusively run & controlled by the state directly (Canadian Broadcast Corporation "CBC") & or owned the a small handful of powerful rich white elites(same cronies that appoint family law judges in Canada). SO BACK TO THE ROOTS OF ANY WELL RUN CRIMINAL ORGANIZATION IS SYSTEMS, PREVENTING DATA COLLECTION & AVOIDING TRANSPARENCY.
Few keys to secrecy include
1 ) Family law transcripts & recordings are kept secret from everyone, which includes the parent which is being abused by the family court. This makes investigation & raw data collection impossible.
2) Data such as the number of times a family law judge threatens a parent with "contempt of court" & uses a court sheriff to       intimidate a parent from talking. (this is a very common tactic, as judges try to control information & "data" being recorded by the    court recorder in the courtroom (which is a way of doubling against data collection). Data such as the number of times a parent has been dragged into family court & why is kept top secret. Data such as number of times a restraining order has been handed out by a family law judge and if a police report existed to support such action & so on and so on. The only industry & business in the world that includes profits in the billions of dollars, but zero data collection. Canadian family law flies in the face of every "business driven information systems" textbook in every college and university in the industrial modern world.
3) Of special note is fact many government affiliated organizations have a very special tool for severing data from the general public, freelance journalists & documentarians who may want to investigate Canada's family law empire. One of the worries of organizations is that eventually someone will force them to comply with Freedom of Information laws & written complaints will be exposed. To  counteract this threat of data breach, organizations employ a front counter person that goes under various tittles such a "commissioner" or "ombudsman(ombudsperson)". Organizations such as the state owned CBC tell complainants to file their complaint with the front counter ombudsmen, of which the front counter "commissioner" or "ombudsmen" stalls a while and then refuses to accept the complaint on behalf of the organization using ambiguous non sense reasons such as "deference" or some other psychobabble.  This again is a further way of the family law cartel, their partners & or servants sever vital family law data.
4) Protection is provided to lawyers(foot soldiers) by the secretive Canadian Law Society that is owned & operated by the rich white elites and judges. The law societies of Canada collect "large fees" from 10s of thousands of lawyers in Canada & funnels this money right back to the top. For this cash, the Canadian Law Society provides protection & insulation to lawyers when parents make complaints about bullying, intimidation, over-charging & other intentional & morally bankrupt adversarial money making tactics by the dirty lawyers. ( a trusted lawyer confided to me that 40% of all lawyers are dirty in this way which gives any parent only a 20% chance of not becoming a victim by either your own lawyer or the other sides legal counsel.
5) Does the family law cartel also hunt down advocates that expose them. Parents often live in terror of family law judges.
6) You can go onto the internet and find family law court crimes of genocide & billion dollar theft by the buckets. Here is an example of a thread 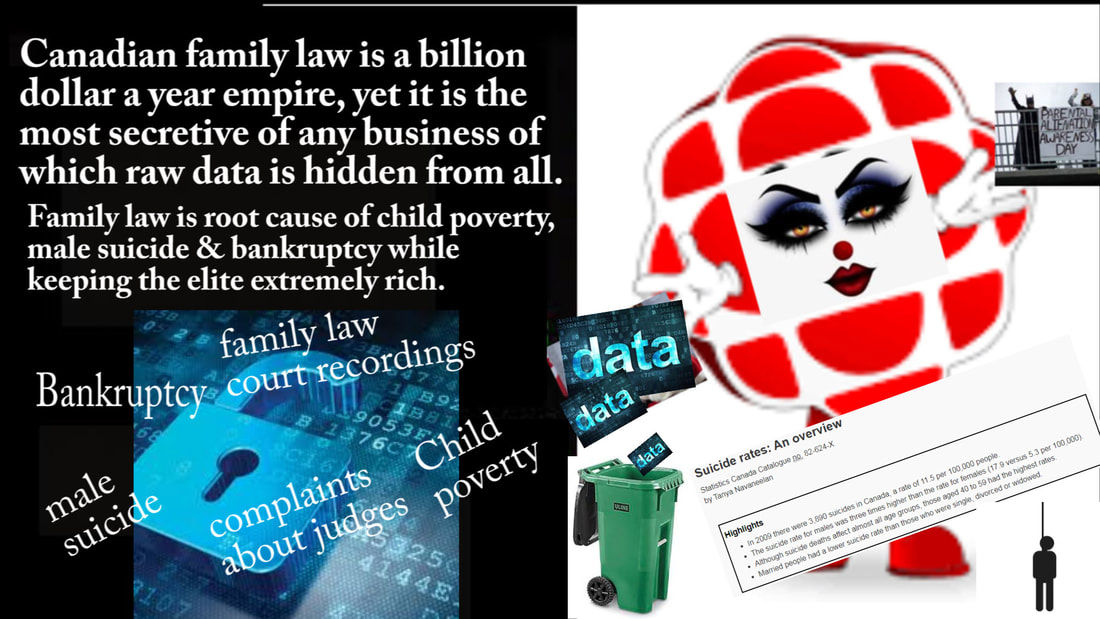