Case study of extreme Canadian Federal Government corruption, bullying, intimidation & the setting up of a fake regulatory body (CJC )to insulate Government appointed  judges that work family law cases. Written complaint about dysfunction, child abuse, theft, threats & bullying in New Westminster, BC Supreme court sent to Prime Minister Justin Trudeau, Ontario Law Society & the highly questionable Canadian Judicial Council. CJC responded without naming Justice Ward Branch by name and dragged the file out for over 6 months before the cover-up. CJC File number 20-0067_ as they call the author of the complaint "You". The Law Society of Ontario indicated they feared the Federal Government's CJC & said "go pound sand" in their fancy forked tonged lawyer vocabulary even though to become a judge, Judge Ward Branch was a lawyer previous in 2017 and would be held to standards under the Law Societies of Canada.
No surprise the Canadian Government raped & beat children for nearly 100 years with impunity in their Indian Residential Schools before they were finally forced to stop by the UN, as the government of Canada still runs all their regulatory bodies in complete secrecy while pumping out propaganda to divert attention away from their crimes against society. In the year 2021, there is still no true independent regulation in Canada while corruption brews under the foam of Government agenda. (read this website's other pages to understand)
This case study of internal Federal Government corruption was sent to Prime Minister Justin Trudeau & his Members of Parliament, but to date the Feds only respond with an automatic email responses that "they take all emails seriously", which of course is ambiguous at best. "WE" do know from experience that when Jody Wilson-Raybould (an MP) who was Minister of Justice for the Feds raised concern about internal corruption, the PM kicked her in the face(metaphorically speaking) & out of his cabinet. Was this a strong message to all other MPs? Evidence to date suggests as much.
List of all 338 Members of Parliament email contacts for your convenience.    A family law petition link
Canadian Judicial Council corruption update: on January 29, 2021 the CBC claimed in a headline that "Norman Sabourin, "executive director" with the Canadian Juridical Council leaves after 16 years due to him being a controversial head" , but on November 23, 2020 it was ex judge J Michael MacDonald that was sending out letters claiming he was "acting director" of the Canadian Judicial Council as he was white-washing an extremely serious complaint about Justice Ward K Branch for intimidation & such. This is one of J Michael MacDonald's letters.
Complaint letter reporting Justice Branch to the corrupt Canadian Judicial Council that called the complaint "conjecture" & then buried it!
Complaint letter reporting justice branch to the corrupt canadian judicial council part 2 (#20-0443)
AFFIDAVIT March 9,2020 used in Justice Branch's NW court-room (an absolute must read)
Response from corrupted Canadian Judicial Council regarding Judge Branch complaint
Response to CJC from COMPLAINANT that was forwarded to PM Trudeau & Canadian MINISTRY of Justice
Response from CJC to email forwarded to PM Trudeau by COMPLAINANT dated Dec 1, 2020
CJC run by judges on the radar for non TRANSPARENCY & hiding complaints about fellow judges
Letter sent to Supreme Court of Canada & PM Justin Trudeau
Letter sent to Canada's ethics commissioner 2021 regarding cjc corruption
Due to "white spread corruption", the MULTI-billion dollar "for profit" family law industry makes a few rich as it eats up Canadian families
no ACCOUNTABILITY in Canada's justice system? (NSRlp) as trudeau does his hair & makeup to distract 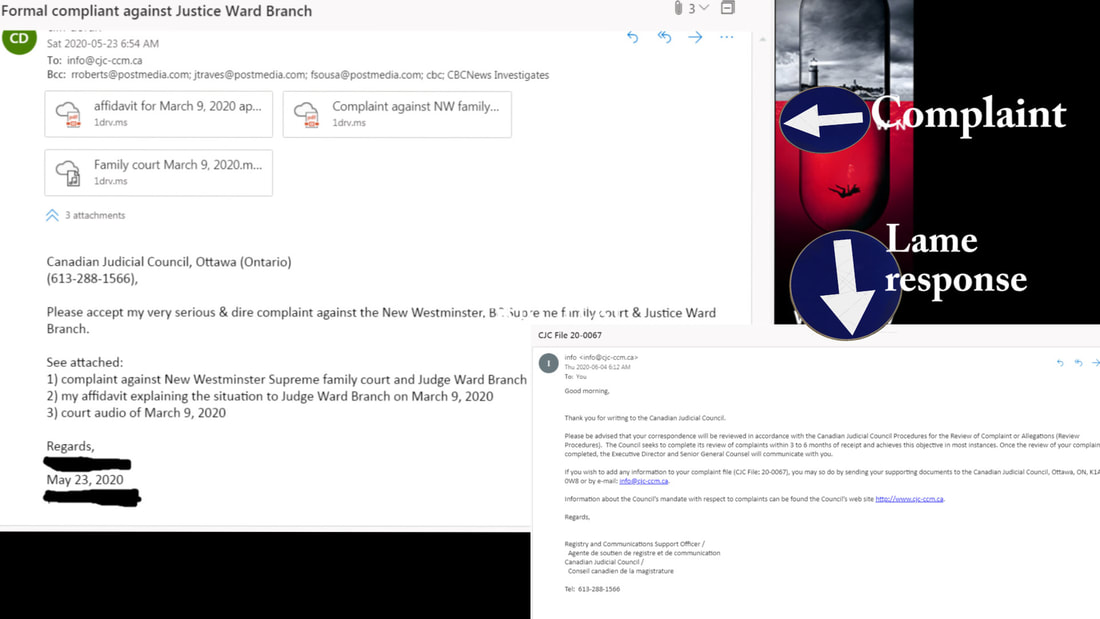