Dirty Liberals put their sweaty hand over the mouths of men to silence their screams.
​If you are being bullied to suicide (re:Stats Canada) by family law lawyers & judges (run by the Canadian government), please report it to your province's Law Society, court Chief Justice(provincial court) or the Canadian Judicial Council(provincial supreme court). Many don't trust Canada's self governing law societies & highly corrupt Canadian Judicial Council and claim they are made up of powerful profiteers & ex-judges who put cronyism and multi-billion dollar profit ahead of the health & well-being of parents & children. If that is your experience, you'r other options are contacting news media & or starting a website sharing your experience. Parental alienation & "for profit" family law corruption harms families! Trudeau Liberals & their cronies get rich/powerful as 1 in 5 children pushed into poverty & dads ages 40 - 59 years of age are bullied into suicide at a ratio of 3:1 over all other Canadians combined! Have a listen to what Fathers Day sounds like for numerous Canadian dads, re: Youtube link.
​ 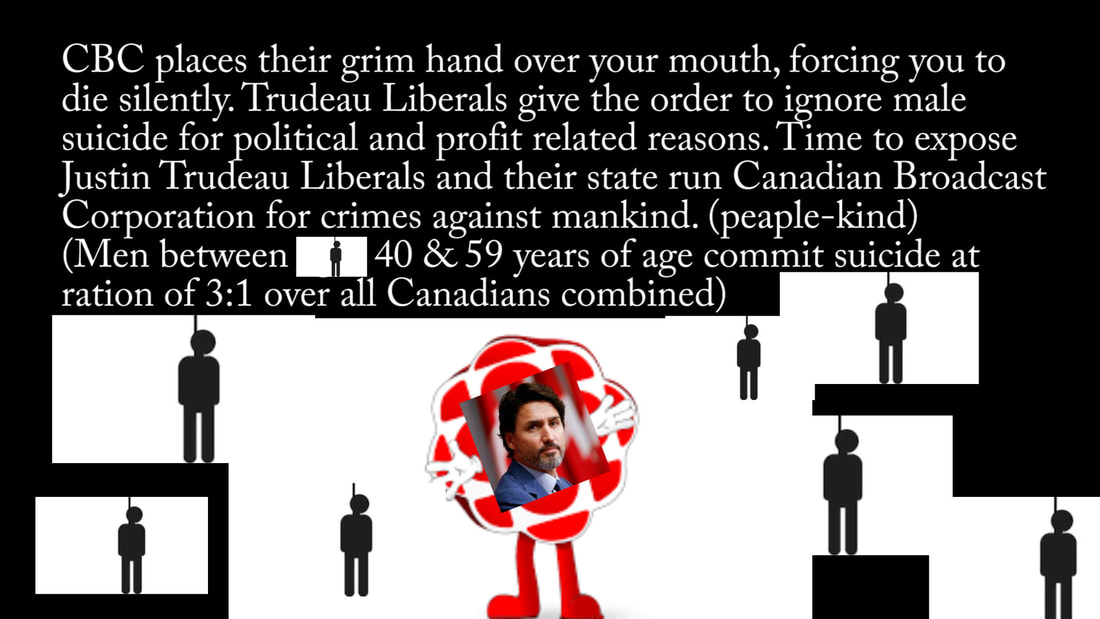 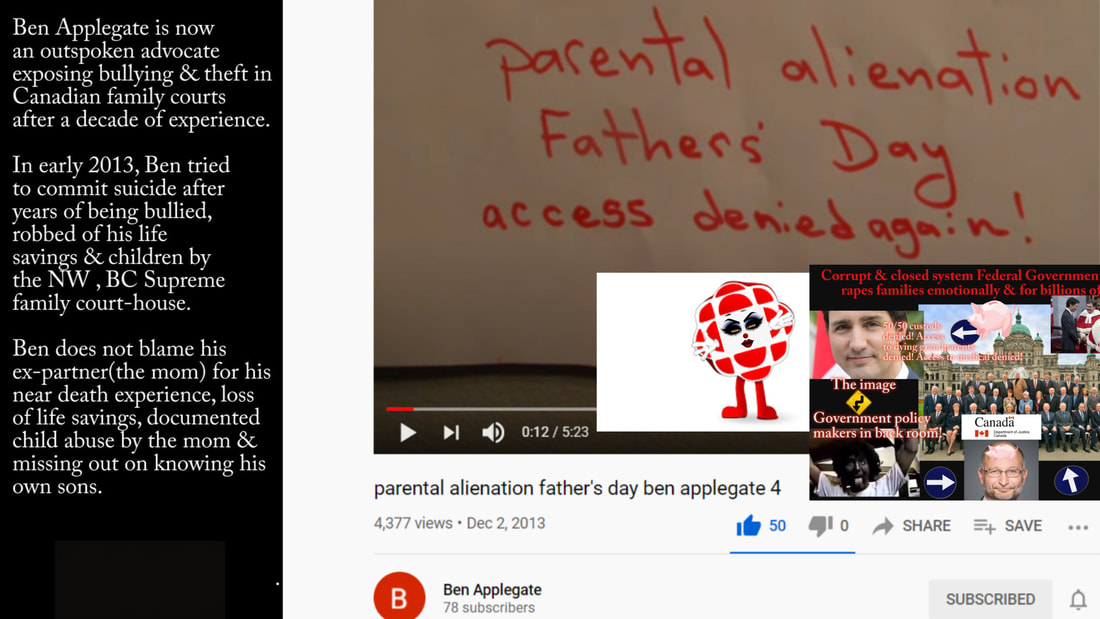 The CBC was asked to do a story on root cause of child poverty & dad's committing suicide, but CBC told advocates to piss off. Advocates then contacted the CBC Ombudsmen & reported willful blindness by this media giant, but again were told to piss off & that dad's between 40 & 59 years of age should die silently.
CBC's lame response to dad's committing suicide click here
Of special note is how the Canadian Broadcast Corporation knowingly misinform the public. The CBC has falsely claimed that male suicide has gone down (ever so slightly). They did this announcement & PR stunt on behalf of the corrupt Canadian government that hands out press releases to promote a sense of "happiness" in Canada. But it is a complete lie, as suicide has actually skyrocketed over the last years. The CBC & corrupt Liberal government of Canada is fully aware that hanging used to be the #1 form of suicide, but now a vast number of dads (men) ages mid 30's to 59 are using opioids to commit suicide. Also, doctors are encouraged to write off many suicides as "accidents" to bring down the numbers.
Canadian Broadcast Corporation tell dads to F**K off & COMMIT suicide silently
Because of elitist "white spread corruption", the "for profit" family law industry is kept a dark secret by powerful a white closed loop system
Advocates & dads have been silenced & arbitrarily demonized with full knowledge from cbc
CBC on war-path to silence non elites & elevate themselves to "white knight" status through arbitrary sneaky CENSORSHIP tactics. 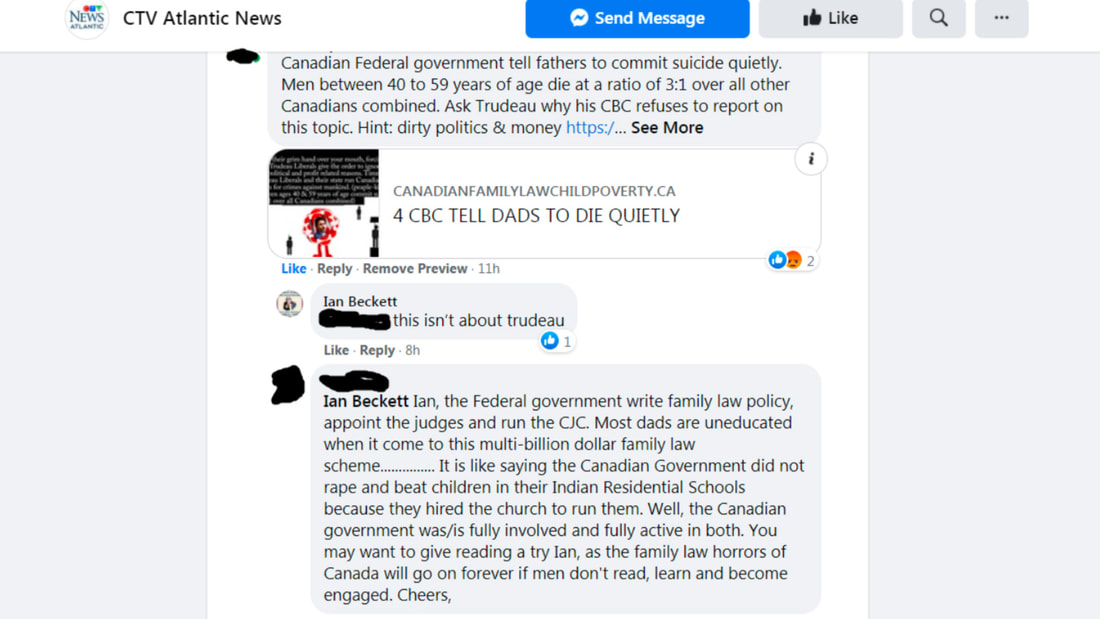 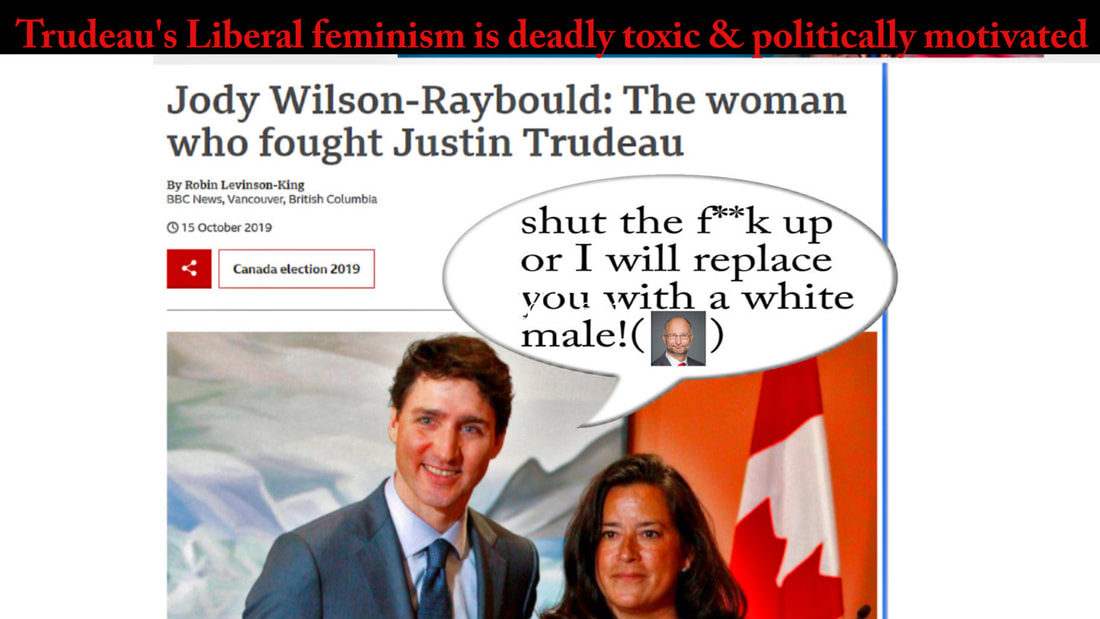 Some Canadians & those outside Canada (yes, the author has been forced to reach for advocacy help outside Canada) may believe this website is partisan against Trudeau's Liberals or the idea of feminism. This is furthest from true, as the author is non partisan & fully supports true feminism 100%.
So who is the author & who does he vote for? The author does not watch TV for the most part & spends his free time reading. Canadian law, sociology, every book on politics he can find & enjoys life in Canada to the fullest. The author has not voted in many years as he saves his energy for contacting Members of Parliament and government bureaucrats directly.
The Liberals (the ideological Liberals in this case) deploy feminism & racism as a weapon to use as their own benefit against others. 20 years ago I was in a parking-lot vehicle collision. I contacted the British Columbia State run Insurance Corporation (ICBC) and communicated that the driver of the other vehicle had produced a drivers licence that did not belong to him. Some time later I received at call from an ICBC employee as I shared my reason for such knowledge and described the person of not even being the same nationality as was on the DL that did not belong to them. (the driver had used a friend's DL that was another nationality) Pretty simple right? Not ! The white lady at ICBC told me I was a racist, and she was certain because she was married to a non white. What ? I did not bother to tell her who I was and my background, but found it very interesting how she deployed her arbitrary sentence of racist upon me. I was fascinated, as this was powerful stuff.
Well, as usual I fought back and went in front of an ICBC tribunal located on Kingsway Street to challenge the claim that I was responsible for the fender bender. Guess what? The ICBC tribunal consisted of 5 people and like the ICBC lady on the phone that I spoke to that called me racist, every single one of those tribunal members were white! This was my first experience with the power of someone arbitrarily using political correctness against me as a weapon to cause harm or try and win a point. PS: The all white ICBC panel sided with me and I won my case.
Ok, so should I have cornered myself and got defensive with the ICBC employee and explained my racial background and my diverse upbringing? Who raised me, my godfather and who I had relationships with over the years. All I will say to the reader of this post is that without my racially diverse history & the extremely smart educated women in my life, I would not have the wealth of priceless experience I do at my 50 years of age.
So jump ahead 20 years after my ICBC experience and hundreds of books later with 2 decades more of life experience and I see the Trudeau Liberals deploying gender divide tactics & political correctness as a platform to keep folks down and lift themselves up. It makes me sick to my stomach. Watch this video of Trudeau as he deploys political correct jibber-ish to try and knock this lady off stride as she asks questions during a town hall meeting. Fascinating. (for the record, Trudeau is not a mastermind, but is a product of his Liberal environment & was vetted by some of the most racist, elitist, educated & corrupt people in Canada to hide behind) Re; Canadian government's "for profit" family law genocide- child poverty & male suicide secrets
The CBC, as many Canadians are aware, is a government propaganda machine disguised as news media. As many Canadians are also aware; Canada is a fake democracy run by the the powerful elite. The powerful elite are extremely crafty at creating dead end bureaucracy designed to insulate themselves from accountability & transparency. An example of this: when a person has a complaint about the CBC ignoring male suicide & tricking the public into a false sense of truth, it deflected to the BC Ombudsman & not the National Newsmedia Council that every other news organization in Canada must answer to. The CBC Ombudsmen is hand picked and highly influenced by his dirty handlers in the Canadian Government. See email below. 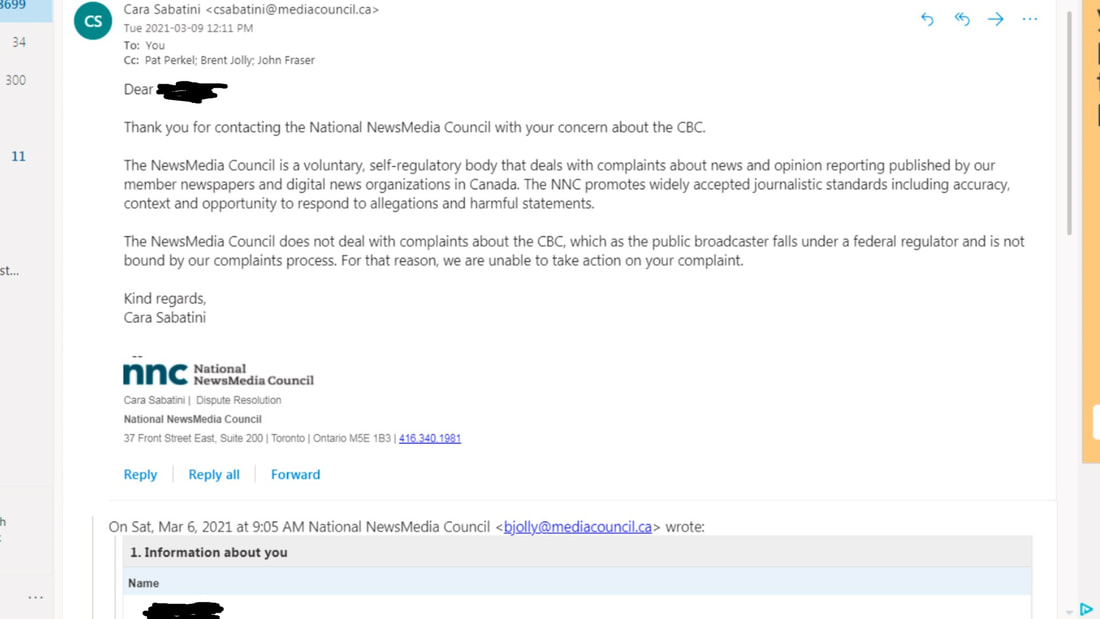